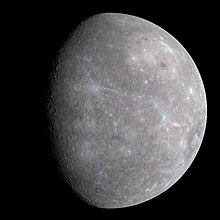 On Friday, the US National Aeronautics and Space Administration (NASA) released the first ever global digital elevation model (DEM) of Mercury.

The DEM was created using data gathered by NASA’s Mercury Surface, Space ENvironment, GEochemistry, and Ranging (MESSENGER) spacecraft, including over 100,000 photographs, and shows a variety of Mercury’s topographical features including the planet’s highest and lowest points. MESSENGER principal investigator Sean Solomon said they hope the information will be used to investigate Mercury’s geological history.

The highest elevation on Mercury is at 4.48 kilometres (2.78 miles) above Mercury’s average elevation, located just south of the equator in some of Mercury’s oldest terrain. The lowest elevation, at 5.38 kilometers (3.34 miles) below Mercury’s average, is found on the floor of the Rachmaninoff basin, a double-ring impact basin suspected to host some of the most recent volcanic deposits on the planet.

The MESSENGER spacecraft was launched in 2004 to study Mercury, including its chemical composition, geology, and magnetic field. MESSENGER began orbiting Mercury in March 2011, becoming the first spacecraft to do so. In April 2015, having completed its mission, MESSENGER dropped out of orbit and impacted the surface of Mercury.